Jon is a first-year master’s student who is interested in reinforcement learning (RL). In his eyes, RL seemed fascinating because he could use RL libraries such as Stable-Baselines3 (SB3) to train agents to play all kinds of games. He quickly recognized Proximal Policy Optimization (PPO) as a fast and versatile algorithm and wanted to implement PPO himself as a learning experience. Upon reading the paper, Jon thought to himself, “huh, this is pretty straightforward.” He then opened a code editor and started writing PPO. CartPole-v1 from Gym was his chosen simulation environment, and before long, Jon made PPO work with CartPole-v1. He had a great time and felt motivated to make his PPO work with more interesting environments, such as the Atari games and MuJoCo robotics tasks. “How cool would that be?” he thought.

However, he soon struggled. Making PPO work with Atari and MuJoCo seemed more challenging than anticipated. Jon then looked for reference implementations online but was shortly overwhelmed: unofficial repositories all appeared to do things differently, whereas he just could not read the Tensorflow 1.x code in the official repo. Fortunately, Jon stumbled across two recent papers that explain PPO’s implementations. “This is it!” he grinned. Failing to control his excitement, Jon started running around in the office, accidentally bumping into Sam, whom Jon knew was working on RL. They then had the following conversation: 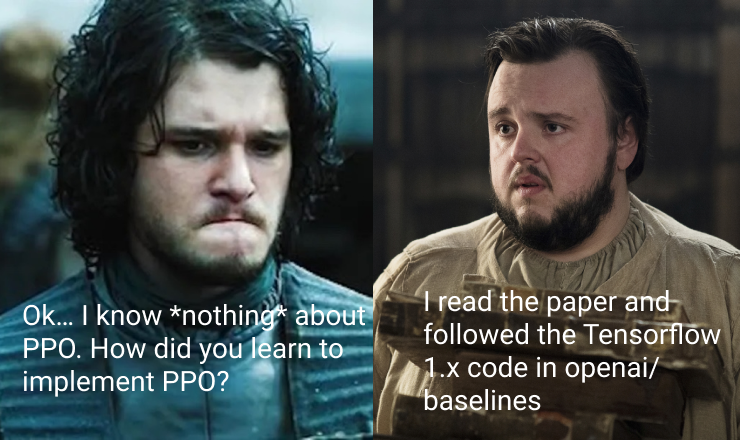 And the blog post is here! Instead of doing ablation studies and making recommendations on which details matter, this blog post takes a step back and focuses on reproductions of PPO’s results in all accounts. Specifically, this blog post complements prior work in the following ways:

Our ultimate purpose is to help people understand the PPO implementation through and through, reproduce past results with high fidelity, and facilitate customization for new research. To make research reproducible, we have made source code available at https://github.com/vwxyzjn/ppo-implementation-details and the tracked experiments available at https://wandb.ai/vwxyzjn/ppo-details

To facilitate more transparent research, Schulman et al., (2017) have made the source code of PPO available in the openai/baselines GitHub repository with the code name pposgd (commit da99706 on 7/20/2017). Later, the openai/baselines maintainers have introduced a series of revisions. The key events include:

In recent years, reproducing PPO’s results has become a challenging issue. The following table collects the best-reported performance of PPO in popular RL libraries in Atari and MuJoCo environments.

Despite the complicated situation, we have found ppo2 (ea25b9e) as an implementation worth studying. It obtains good performance in both Atari and MuJoCo tasks. More importantly, it also incorporates advanced features such as LSTM and treatment of the MultiDiscrete action space, unlocking application to more complicated games such as Real-time Strategy games. As such, we define ppo2 (ea25b9e) as the official PPO implementation and base the remainder of this blog post on this implementation.

In this section, we introduce five categories of implementation details and implement them in PyTorch from scratch.

For each category (except the first one), we benchmark our implementation against the original implementation in three environments, each with three random seeds. 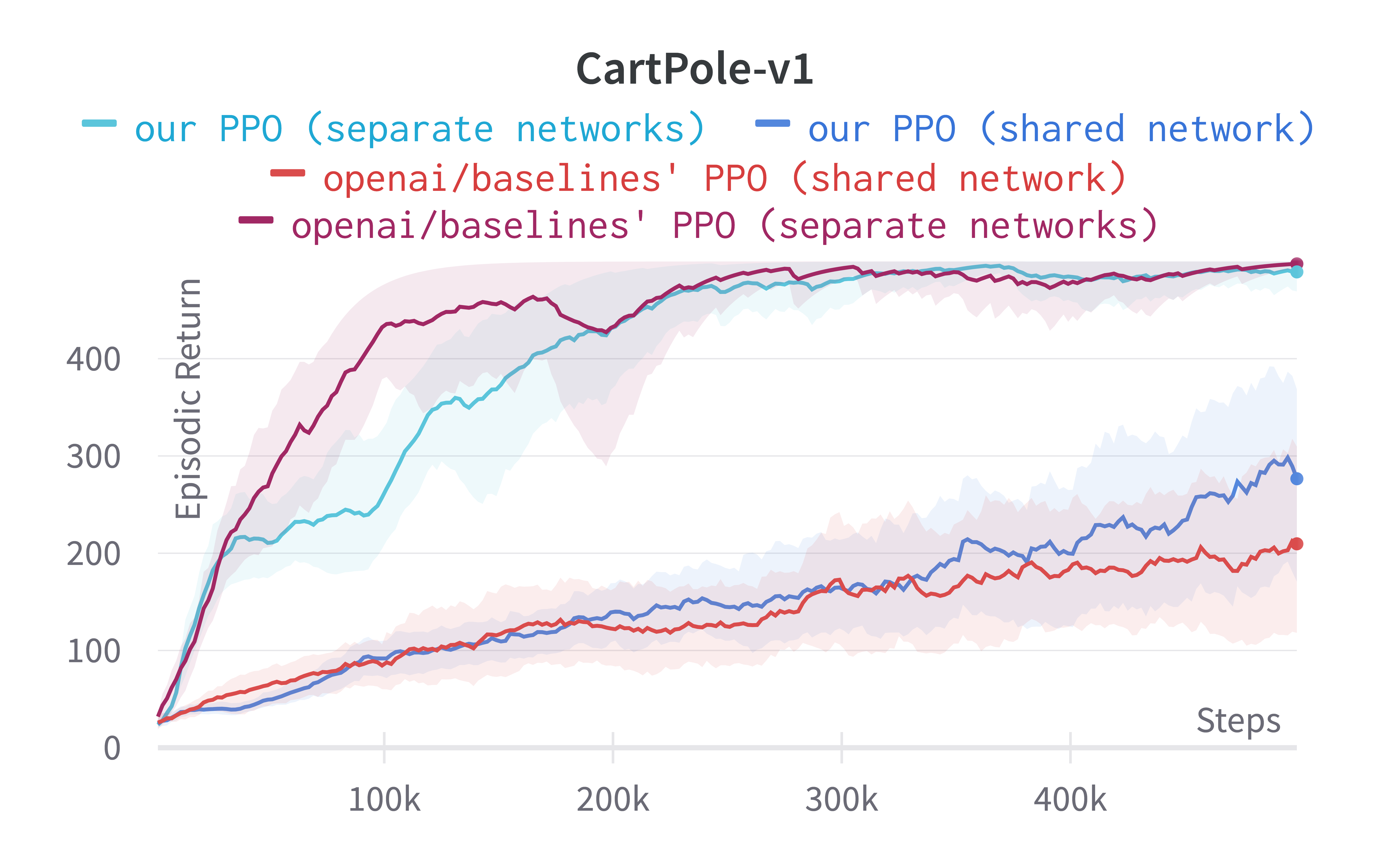 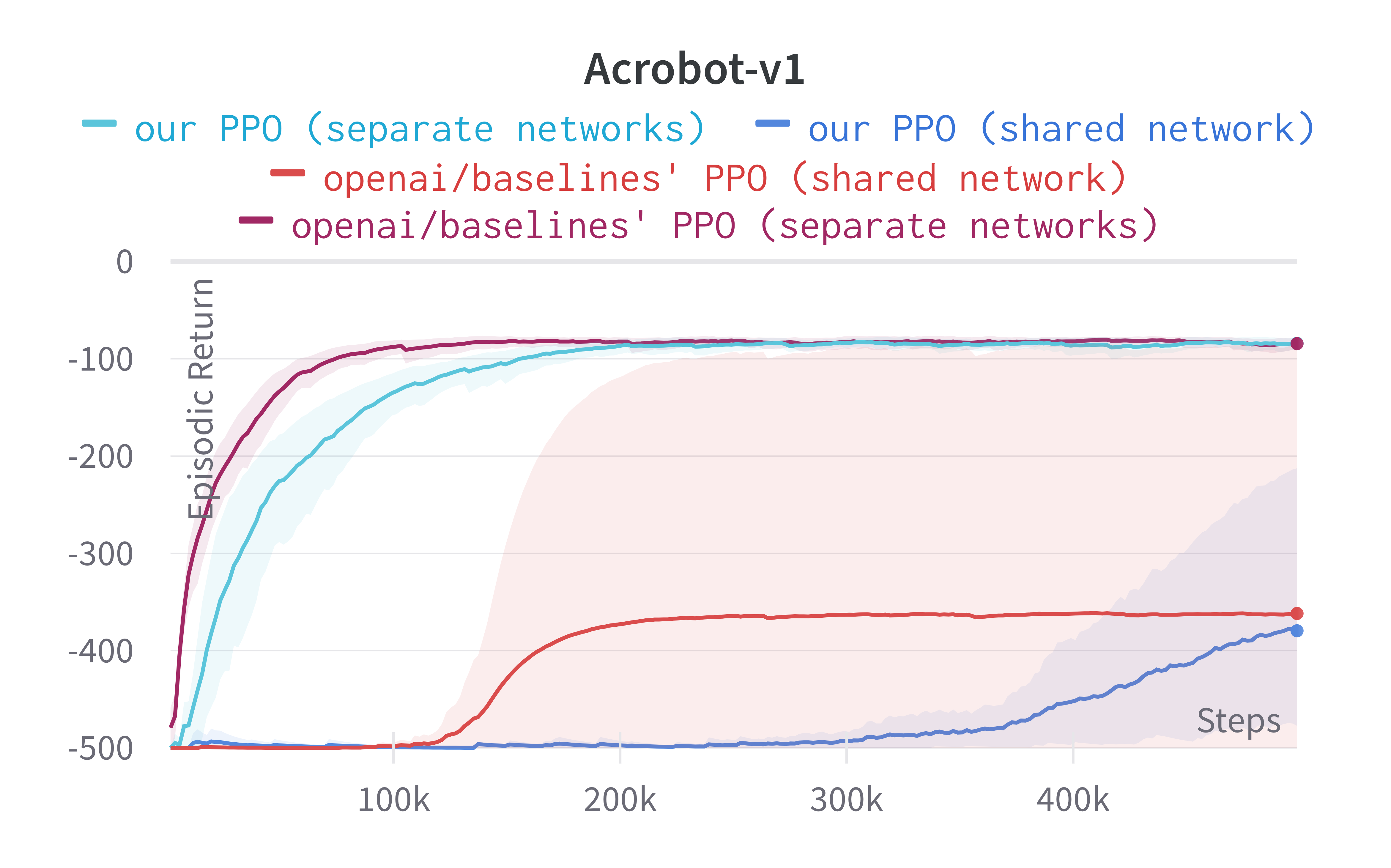 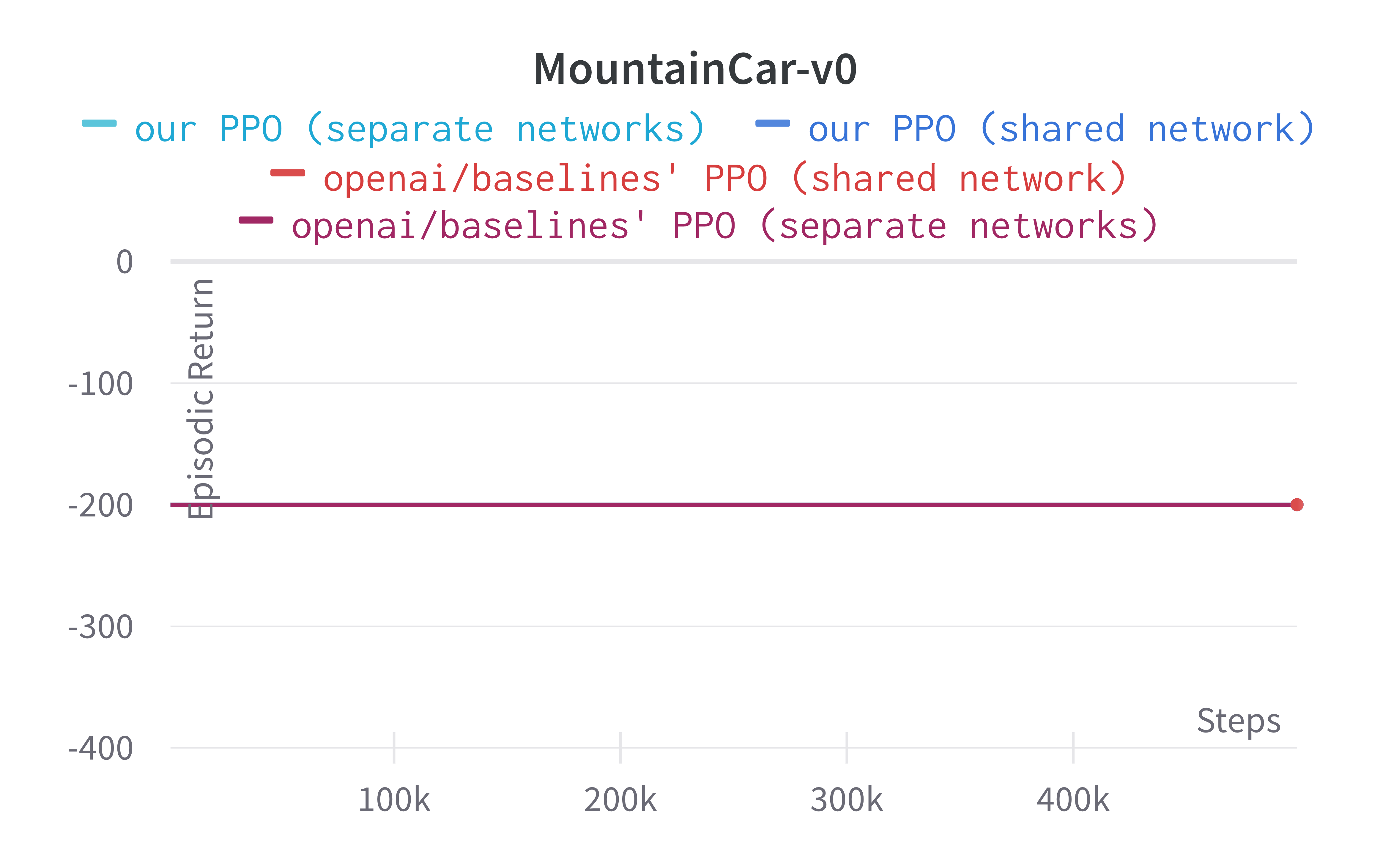 Next, we introduce the 9 Atari-specific implementation details. To help understand how to code these details in PyTorch, we have prepared a line-by-line video tutorial.

To run the experiments, we match the hyperparameters used in the original implementation as follows.

Note that the number of environments parameter $N$ (i.e., num_envs) is set to the number of CPUs in the computer (common/cmd_util.py#L167), which is strange. We have chosen instead to match the N=8 used in the paper (the paper listed the parameter as “number of actors, 8”).

As shown below, we make ~40 lines of code change to ppo.py to incorporate these 9 details, resulting in a self-contained ppo_atari.py (link) that has 339 lines of code. The following shows the file difference between the ppo.py (left) and ppo_atari.py (right).

Next, we introduce the 9 details for continuous action domains such as MuJoCo tasks. To help understand how to code these details in PyTorch, we have prepared a line-by-line video tutorial. Note that the video tutorial skips over the 4-th implementation detail during its making, hence the video has the title “8 Details for Continuous Actions”

To run the experiments, we match the hyperparameters used in the original implementation as follows.

Note that value_network='copy' means to use the separate MLP networks for policy and value functions (i.e., the 4th implementation detail in this section). Also, the number of environments parameter $N$ (i.e., num_envs) is set to 1 (common/cmd_util.py#L167). Below are the benchmarked results. 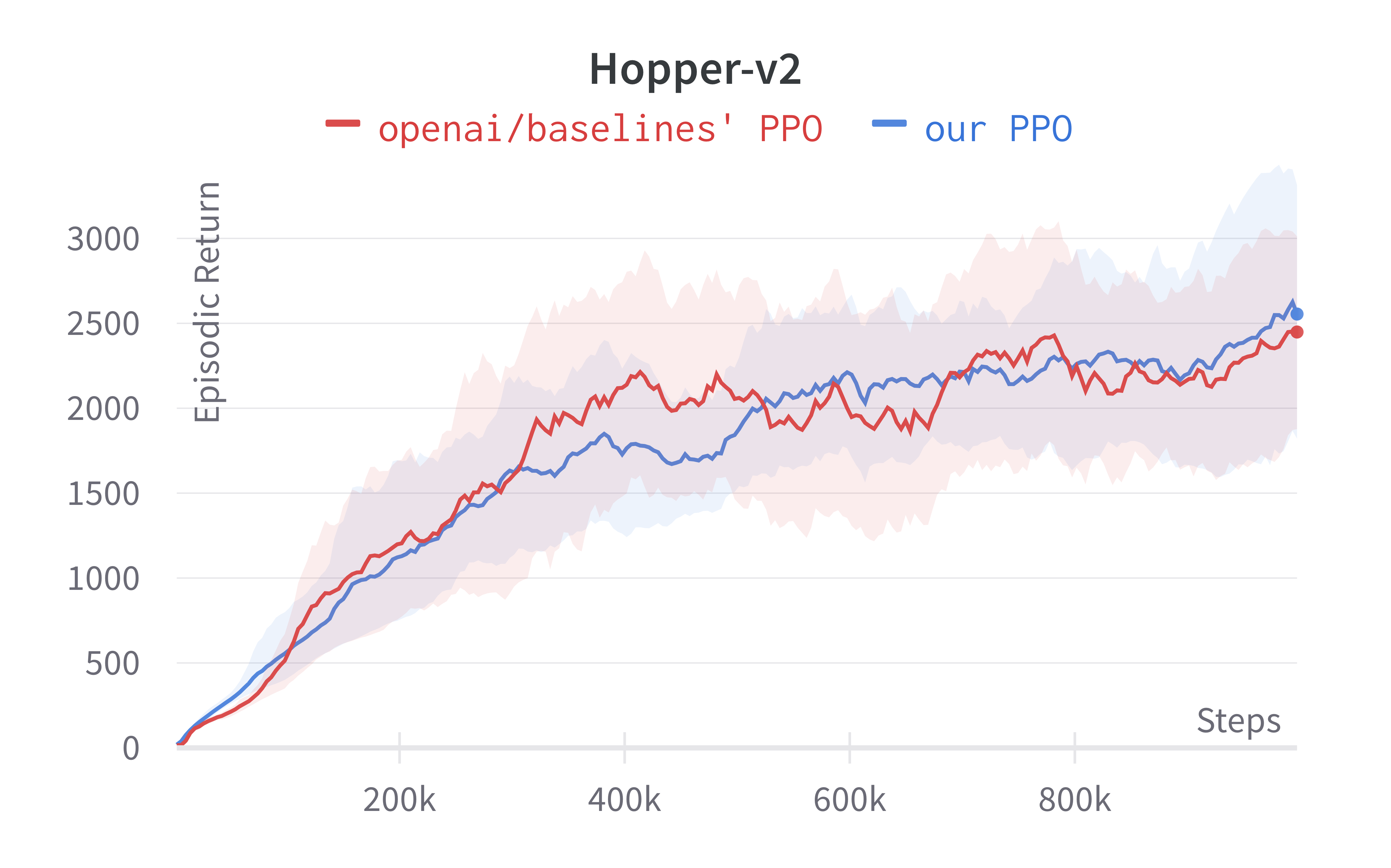 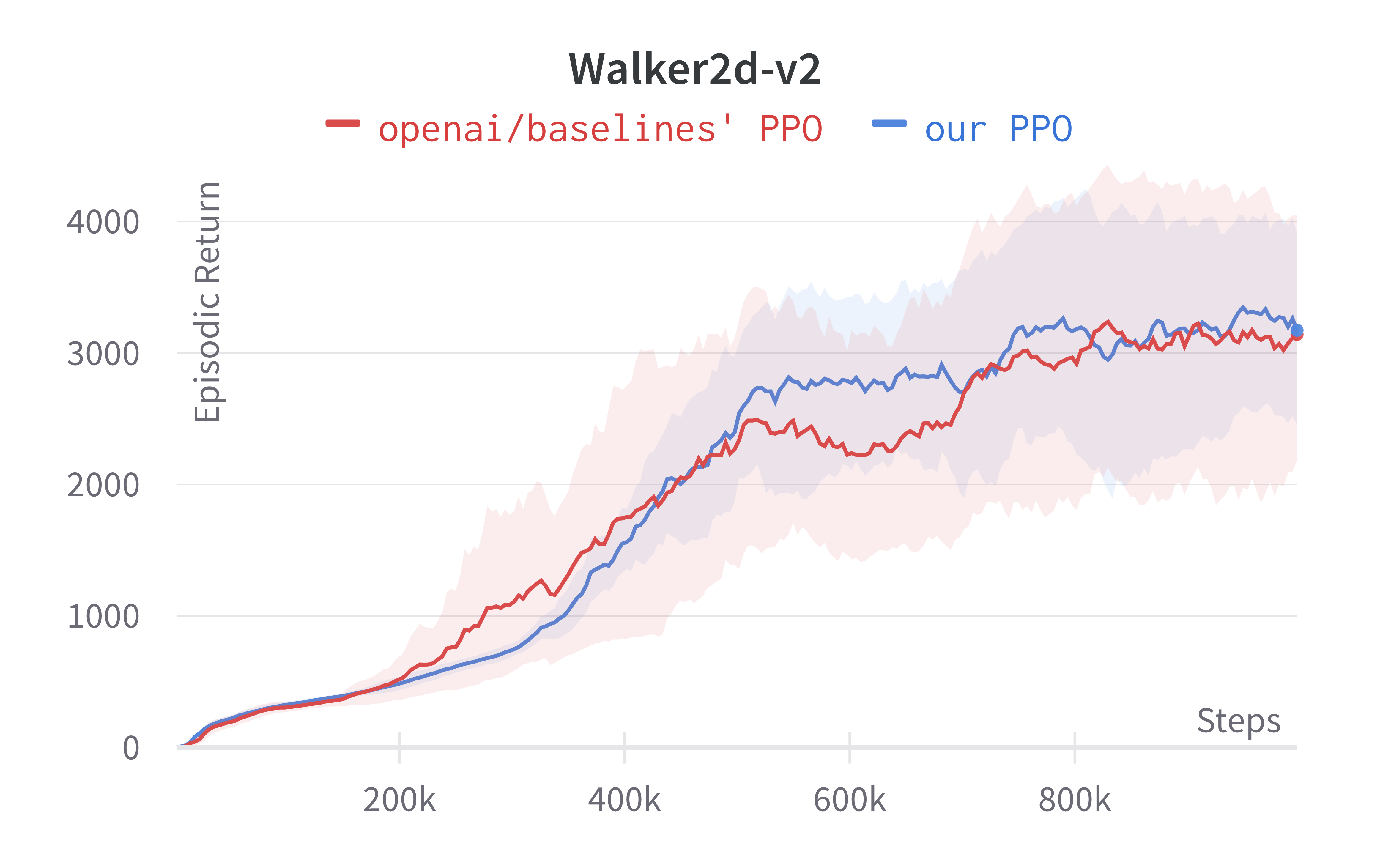 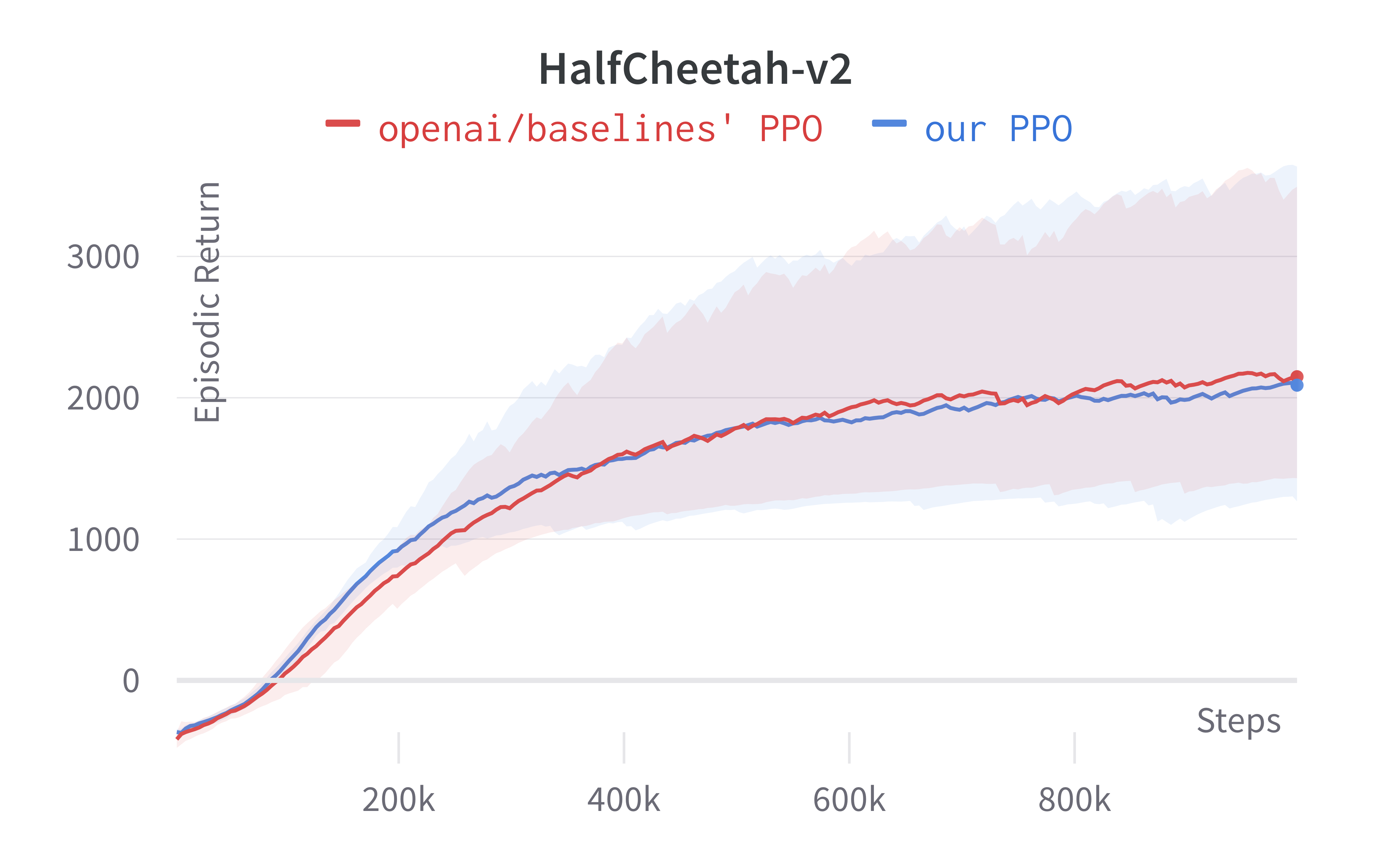 Next, we introduce the 5 details for implementing LSTM.

To run the experiments, we use the Atari hyperparameters again and remove the frame stack (i.e., setting the number of frames stacked to 1). Below are the benchmarked results.

Next, we introduce 1 detail for handling MultiDiscrete action space:

To run the experiments, we use the Atari hyperparameters again and use Gym-μRTS (Huang et al, 2021) as the simulation environment.

Next, we introduce 4 auxiliary techniques that are not used (by default) in the official PPO implementations but are potentially useful in special situations.

To run the experiments, we use the Atari hyperparameters again and use an older version of Gym-μRTS (Huang et al, 2021) as the simulation environment. Below are the benchmarked results. 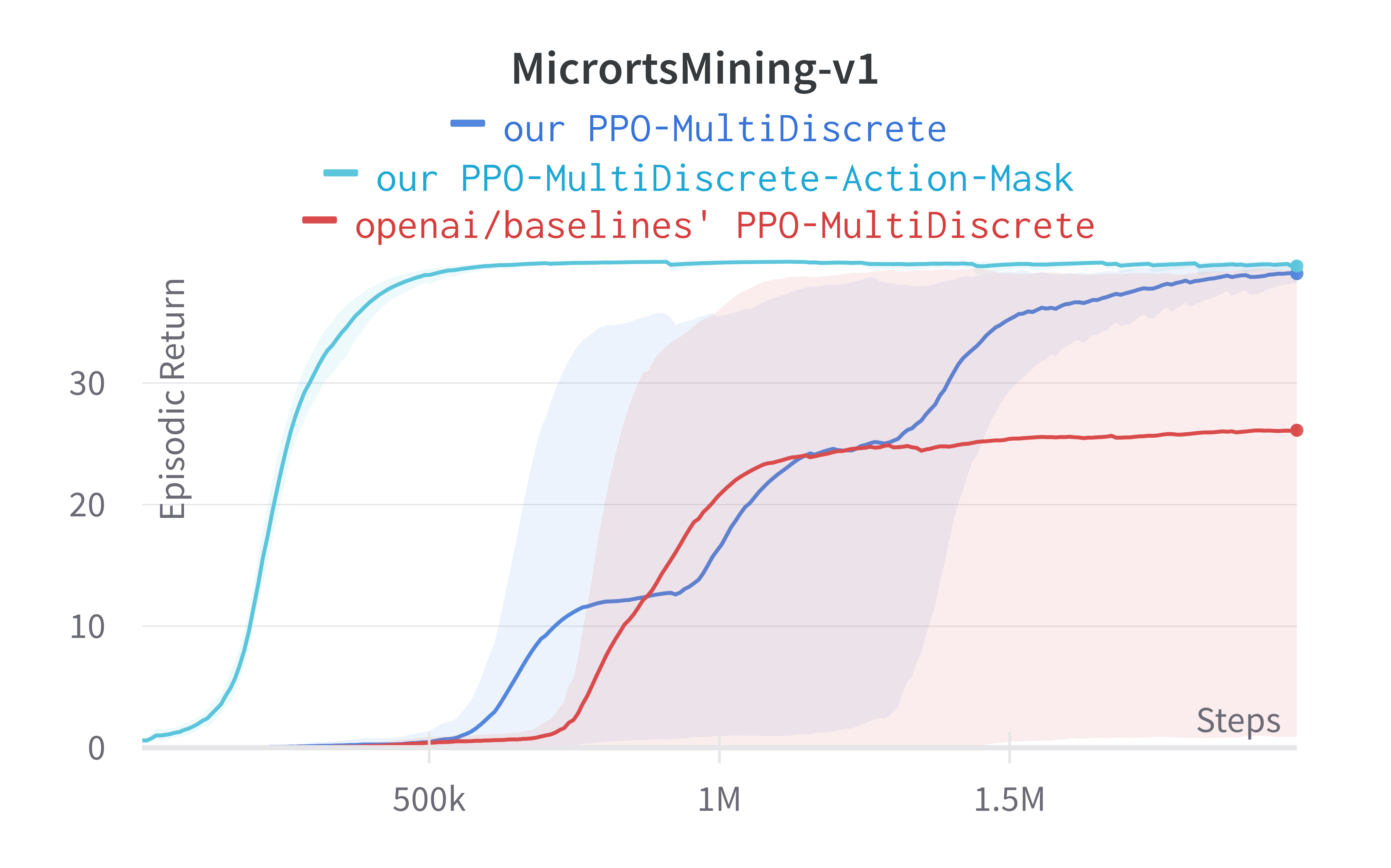 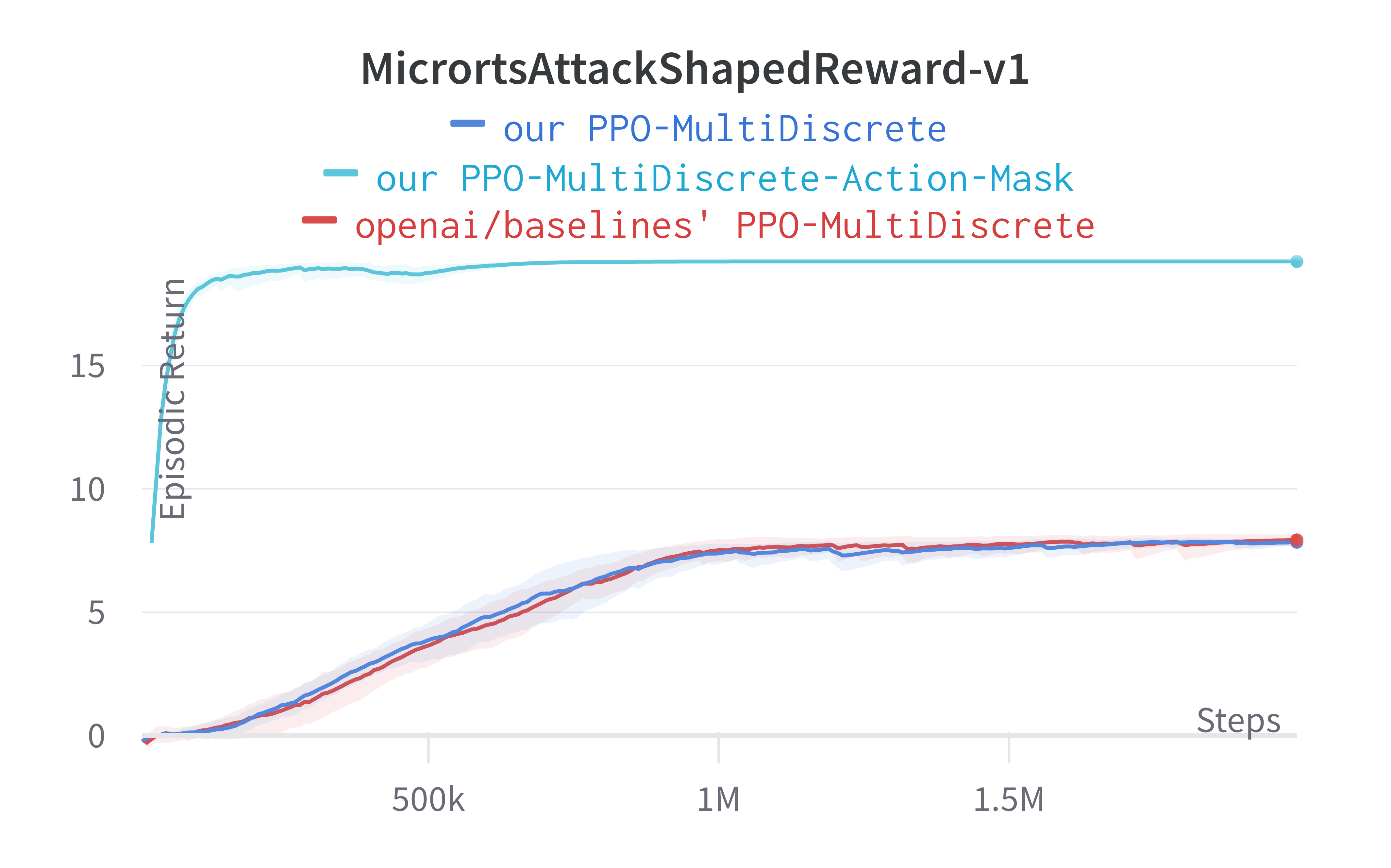 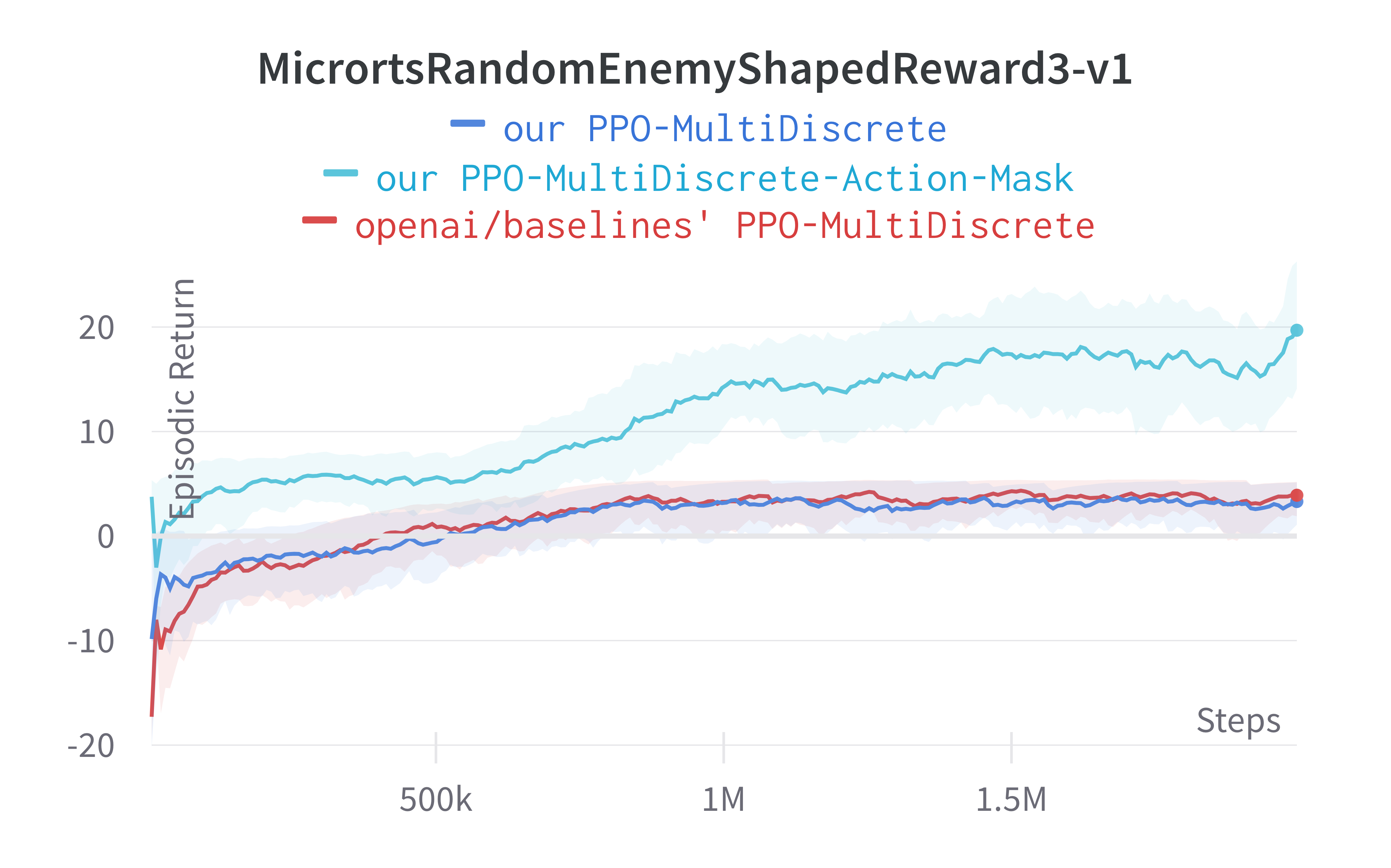 As shown under each section, our implementations match the results of the original implementation closely. This close matching also extends to other metrics such as policy and value losses. We have made an interactive HTML below for interested viewers to compare other metrics:

During our reproduction, we have found a number of useful debugging techniques. They are as follows:

If you are doing research using PPO, consider adopting the following recommendations to help improve the reproducibility of your work:

This blog post demonstrates reproducing PPO is a non-trivial effort, even though PPO’s source code is readily available for reference. Why is it the case? We think one important reason might be that modularity disperses implementation details.

Almost all RL libraries have adopted modular design, featuring different modules / files like env.py, agent.py, network.py, utils.py, runner.py, etc. The nature of modularity necessarily puts implementation details into different files, which is usually great from a software engineering perspective. That is, we don’t have to know how other components work when we just work on env.py. Being able to treat other components as black boxes has empowered us to work on large and complicated systems for the last decades.

Modular design still offers numerous benefits such as 1) easy-to-use interface, 2) integrated test cases, 3) easy to plug different components and others. To this end, good RL libraries are valuable, and we recommend them to write good documentation and refactor libraries to adopt new features. For algorithmic researchers, however, we recommend considering single-file implementations because they are straightforward to read and extend.

Not necessarily. The high-throughput variant Asynchronous PPO (APPO) (Berner et al., 2019) has obtained more attention in recent years. APPO eliminates the idle time in the original PPO implementation (e.g., have to wait for all $N$ environments to return observations), resulting in much higher throughput, GPU and CPU utilization. However, APPO involves performance-reducing side-effects, namely stale experiences (Espeholt et al., 2018), and we have found insufficient evidence to ascertain its improvement. The biggest issue is:

Underbenchmarked APPO implementation: RLlib has an APPO implementation, yet its documentation contains no benchmark information and suggest “APPO is not always more efficient; it is often better to use standard PPO or IMPALA.” Sample Factory (Petrenko et al, 2020) presents more benchmark results, but its support for Atari games is still a work in progress. To our knowledge, there is no APPO implementation that simultaneously works with Atari games, MuJoCo or Pybullet tasks, MultiDiscrete action spaces and with an LSTM.

In the following section, we demonstrate accelerated training with PPO + envpool in the Atari game Pong.

Envpool is a recent work that offers accelerated vectorized environments for Atari by leveraging C++ and thread pools. Our PPO gets a free and side-effects-free performance boost by simply adopting it. We make ~60 lines of code change to ppo_atari.py to incorporate this 1 detail, resulting in a self-contained ppo_atari_envpool.py (link) that has 365 lines of code. The following shows the file difference between the ppo_atari.py (left) and ppo_atari_envpool.py (right).

As shown below, Envpool + PPO runs 3x faster without side effects (as in no loss of sample efficiency): 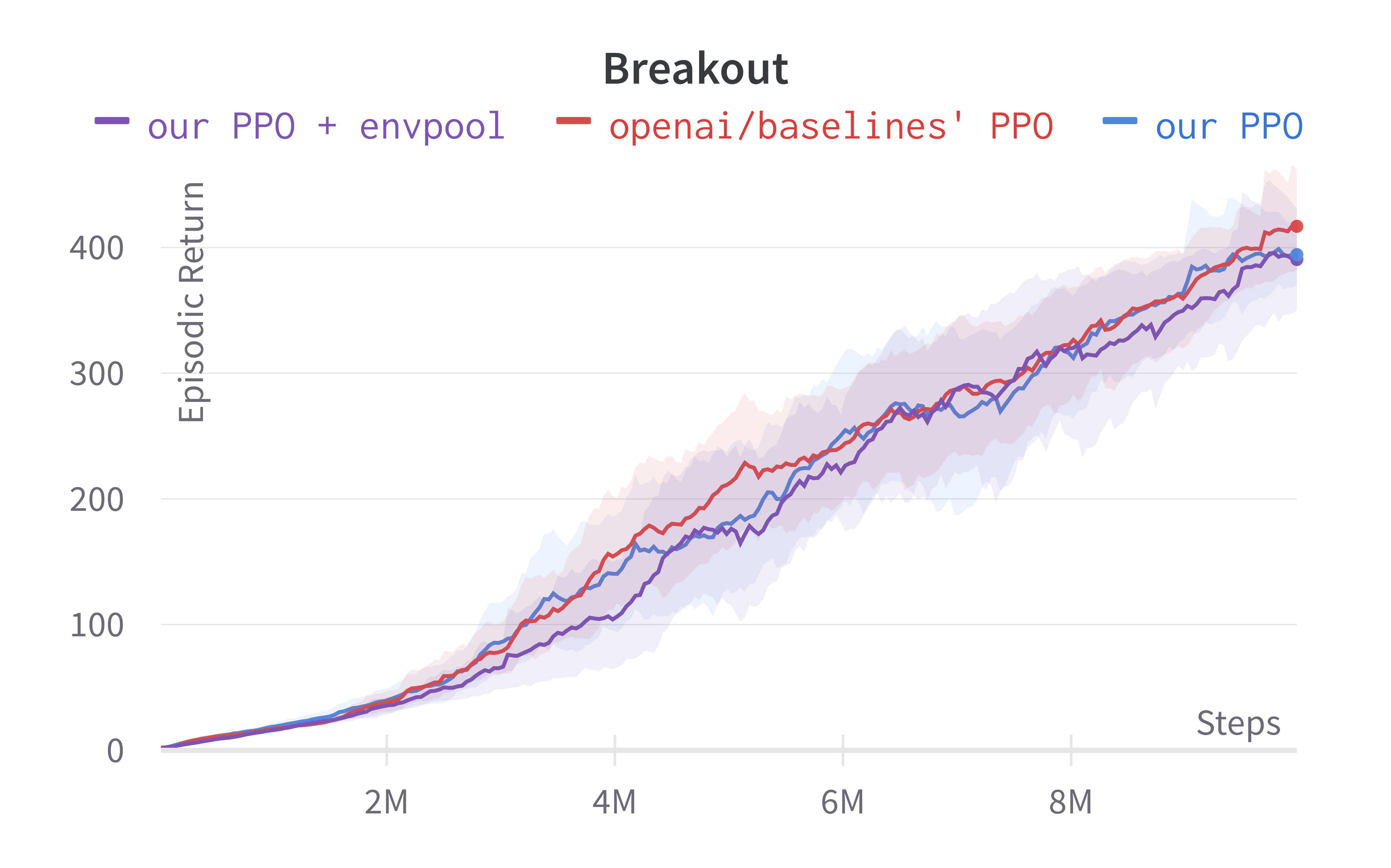 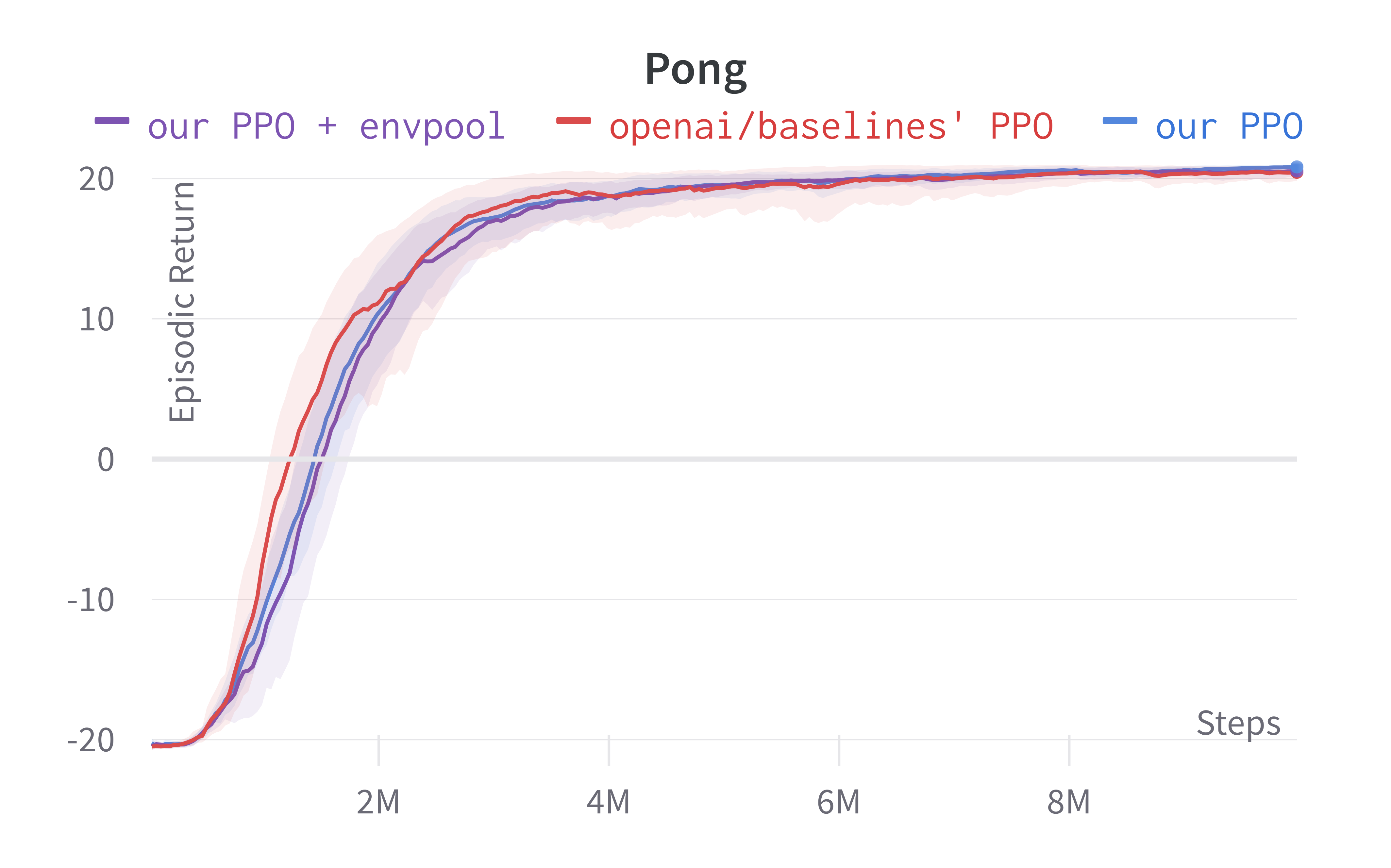 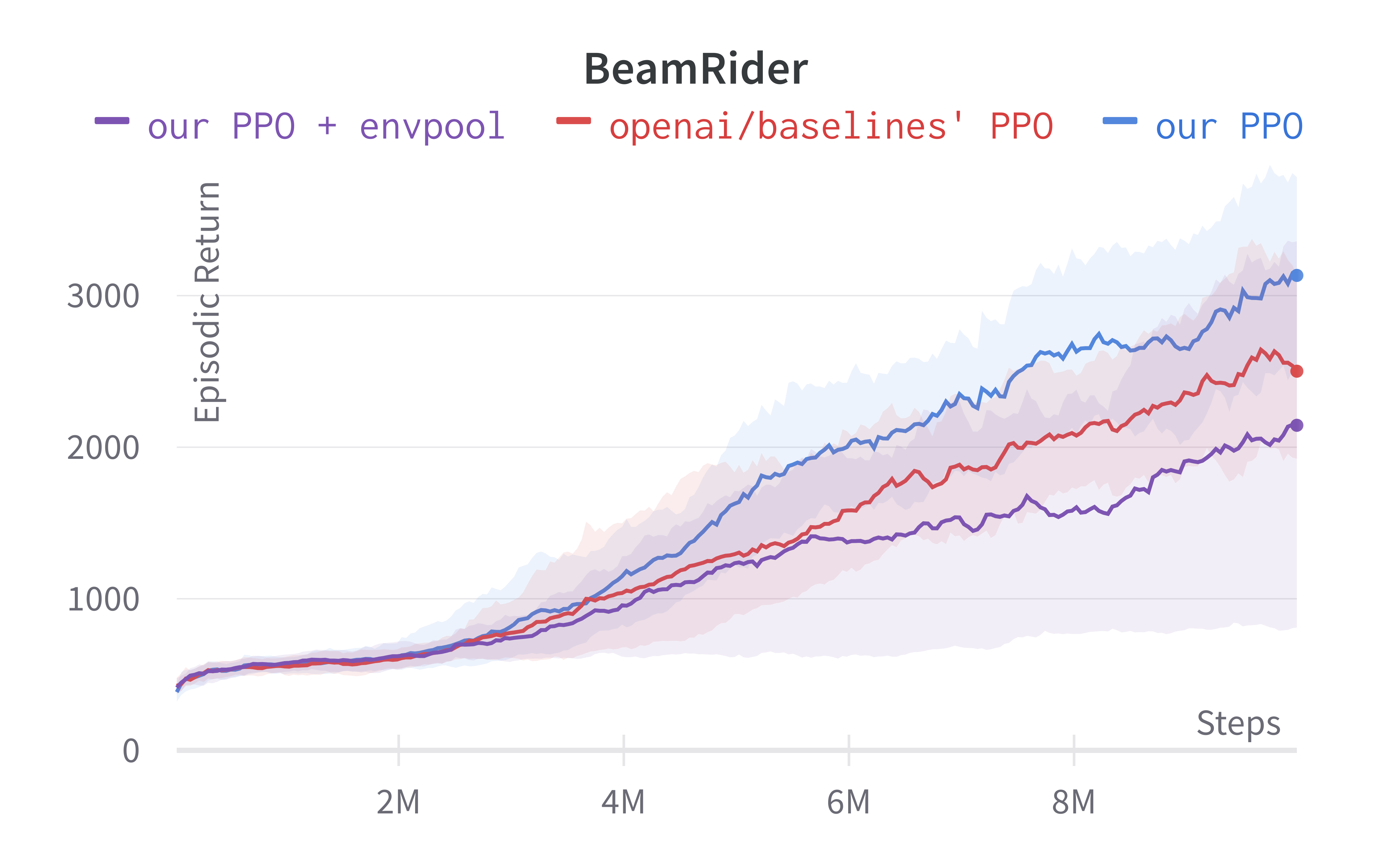 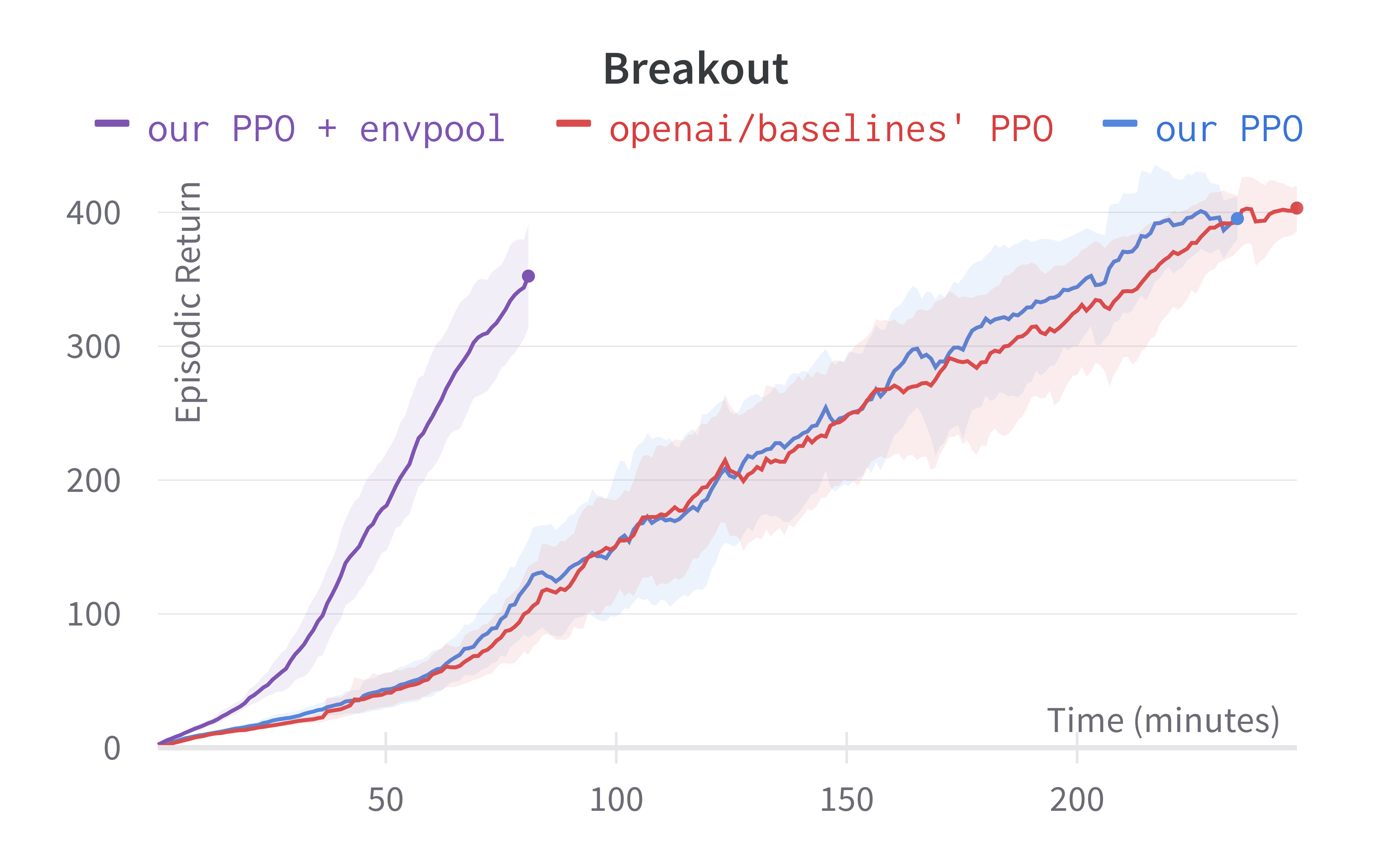 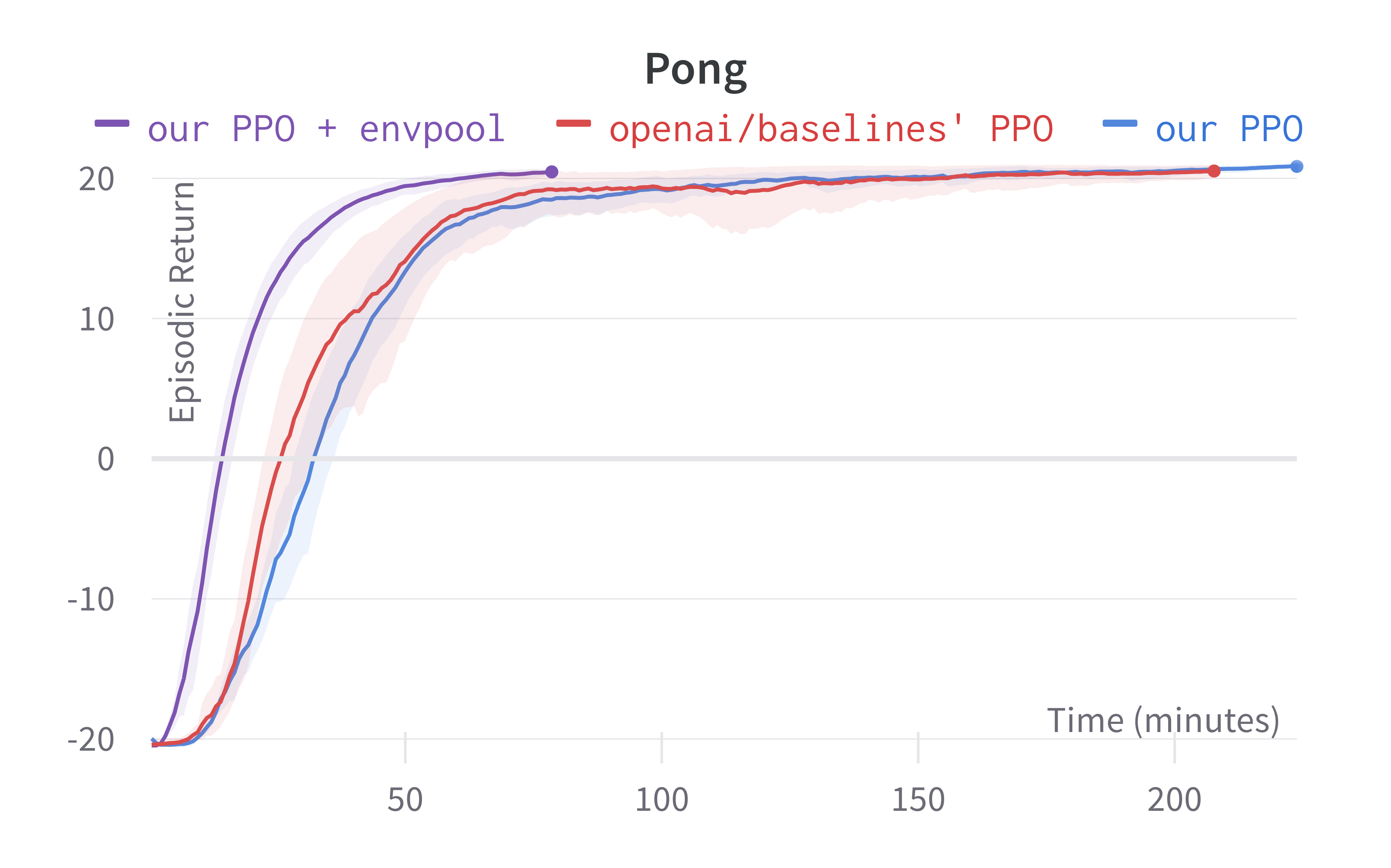 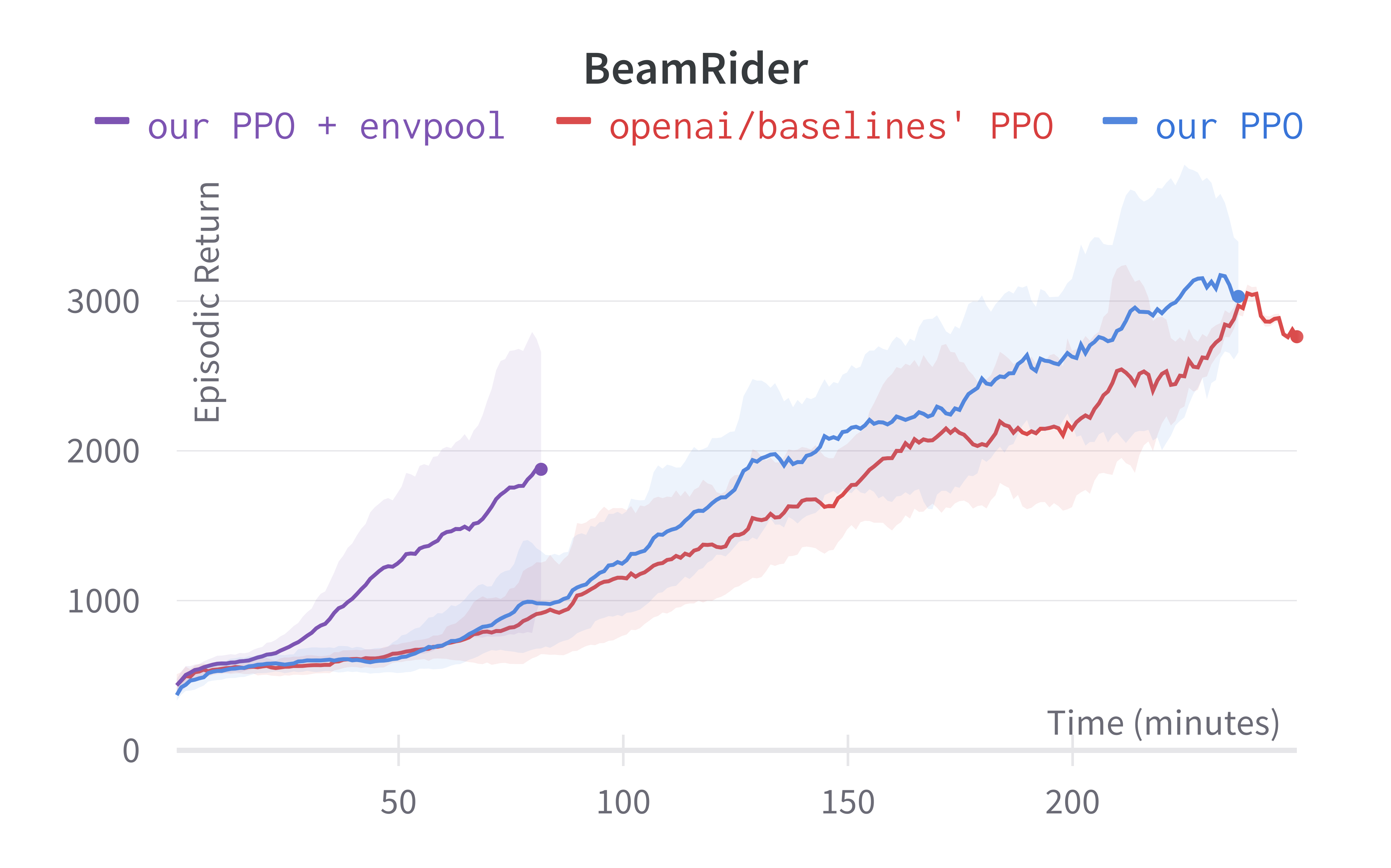 Two quick notes: 1) the performance deterioration in BeamRider is largely due to a degenerate random seed, and 2) Envpool uses the v5 ALE environments but has processed them the same way as the v4 ALE environments used in our previous experiments. Furthermore, by tuning the hyperparameters, we obtained a run that solves Pong in 5 mins. This performance is even comparable to IMPALA’s (Espeholt et al., 2018) results: 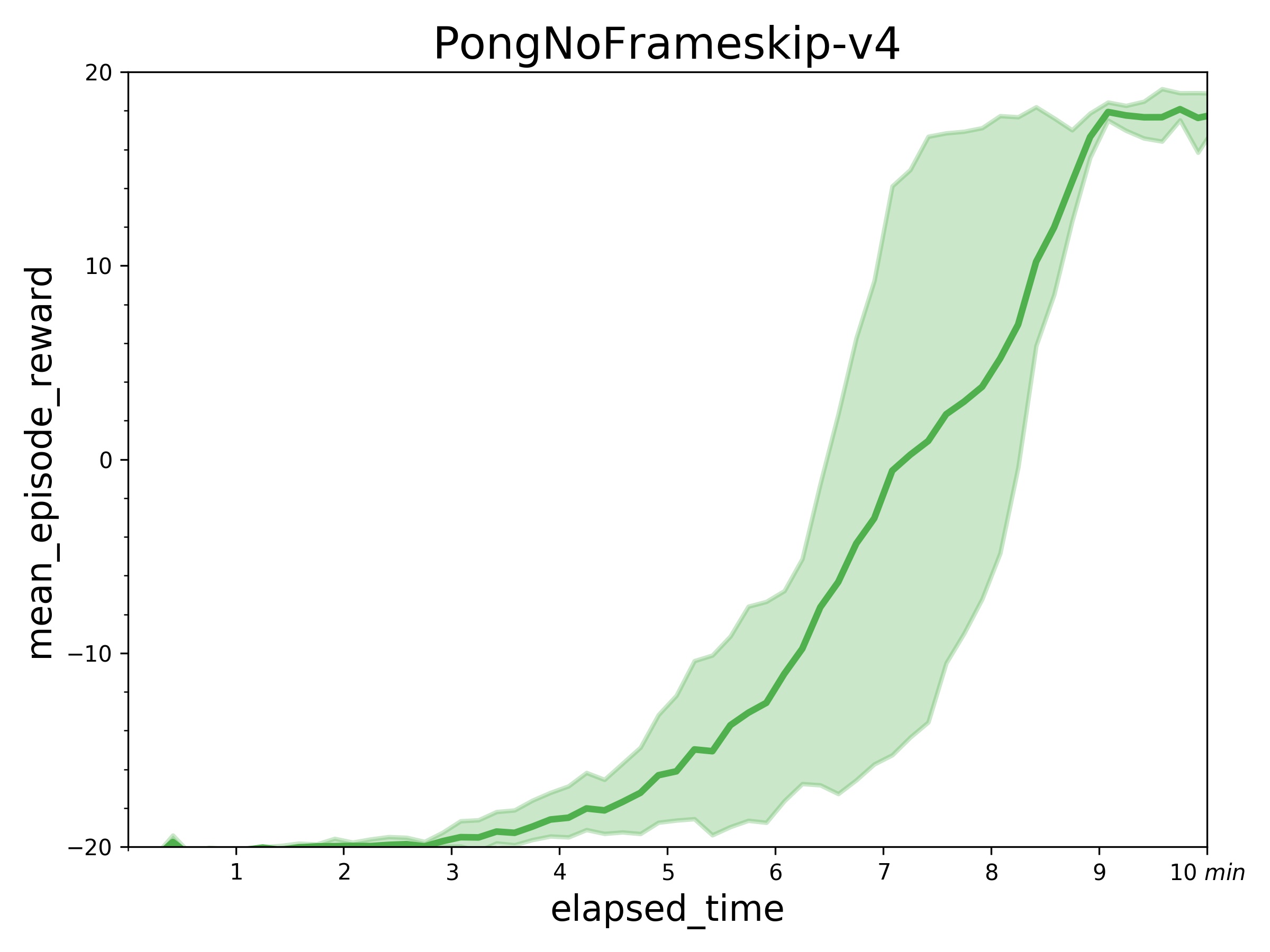 We think this raises a practical consideration: adopting async RL such as IMPALA could be more difficult than just making your vectorized environments fast.

Given this blog post, we believe the community understands PPO better and would be in a much better place to make improvements. Here are a few suggested areas for research.

Reproducing PPO’s results has been difficult in the past few years. While recent works conducted ablation studies to provide insight on the implementation details, these works are not structured as tutorials and only focus on details concerning robotics tasks. As a result, reproducing PPO from scratch can become a daunting experience. Instead of introducing additional improvements or doing further ablation studies, this blog post takes a step back and focuses on delivering a thorough reproduction of PPO in all accounts, as well as aggregating, documenting, and cataloging its most salient implementation details. This blog post also points out software engineering challenges in PPO and further efficiency improvement via the accelerated vectorized environments. With these, we believe this blog post will help people understand PPO faster and better, facilitating customization and research upon this versatile RL algorithm.

We thank Weights and Biases for providing a free academic license that helps us track the experiments. Shengyi would like to personally thank Angelica Pan, Scott Condron, Ivan Goncharov, Morgan McGuire, Jeremy Salwen, Cayla Sharp, Lavanya Shukla, and Aakarshan Chauhan for supporting him in making the video tutorials.

In this appendix, we introduce one detail for reproducing PPO’s results in the procgen environments (Cobbe et al, 2020).

To run the experiment, we try to match the default setting in openai/train-procgen except that we use the easy distribution mode and total_timesteps=25e6 to save compute. 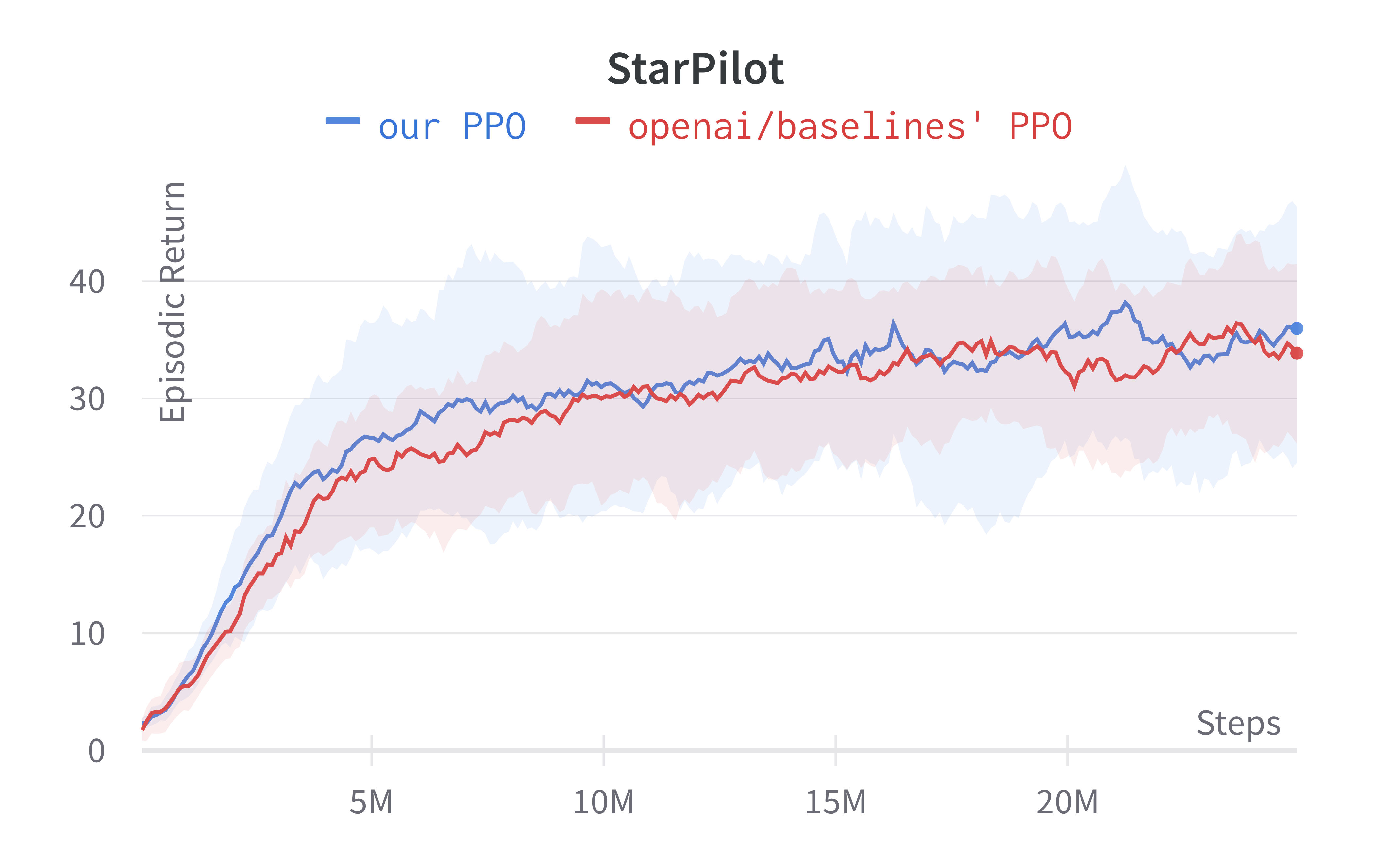 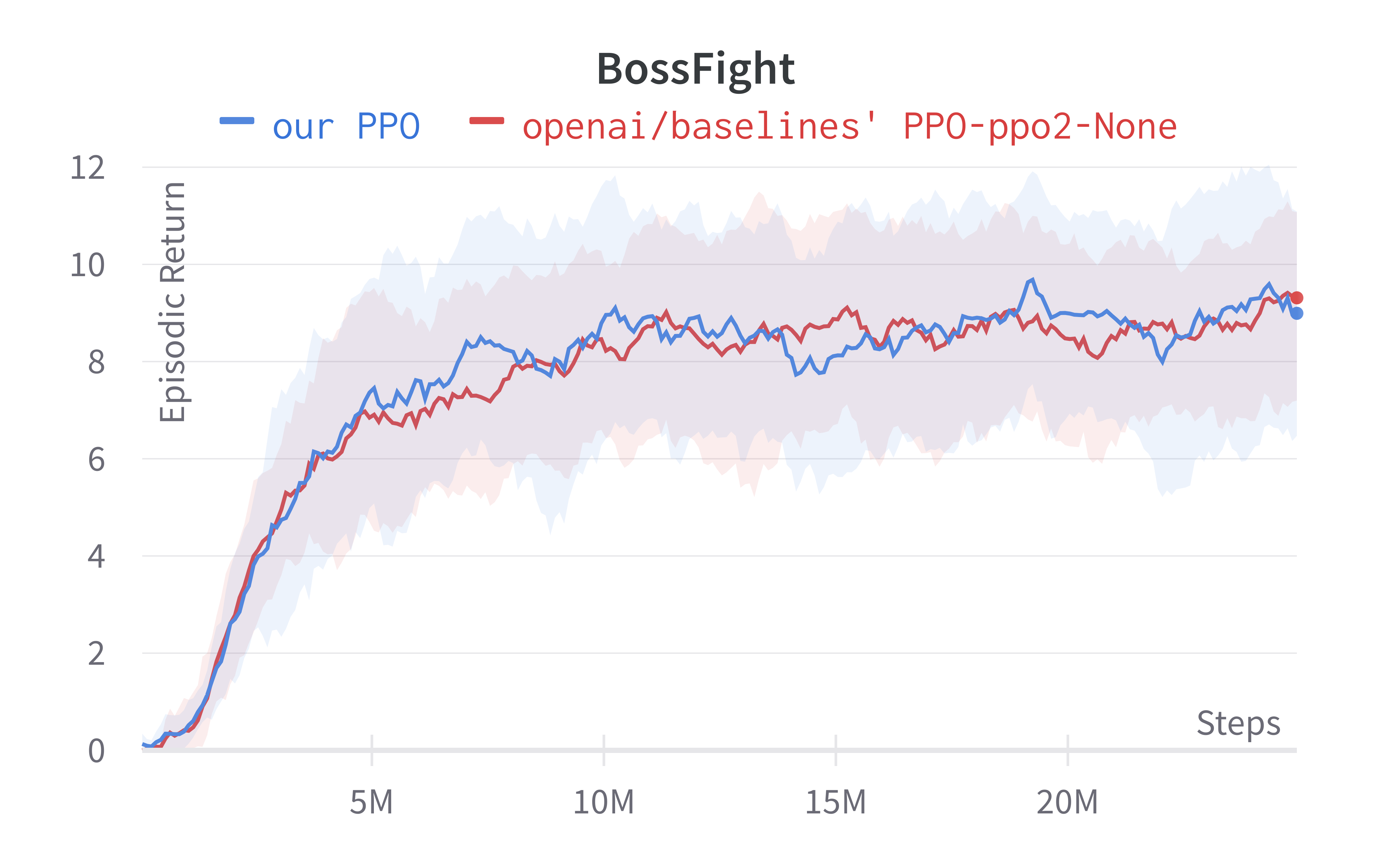 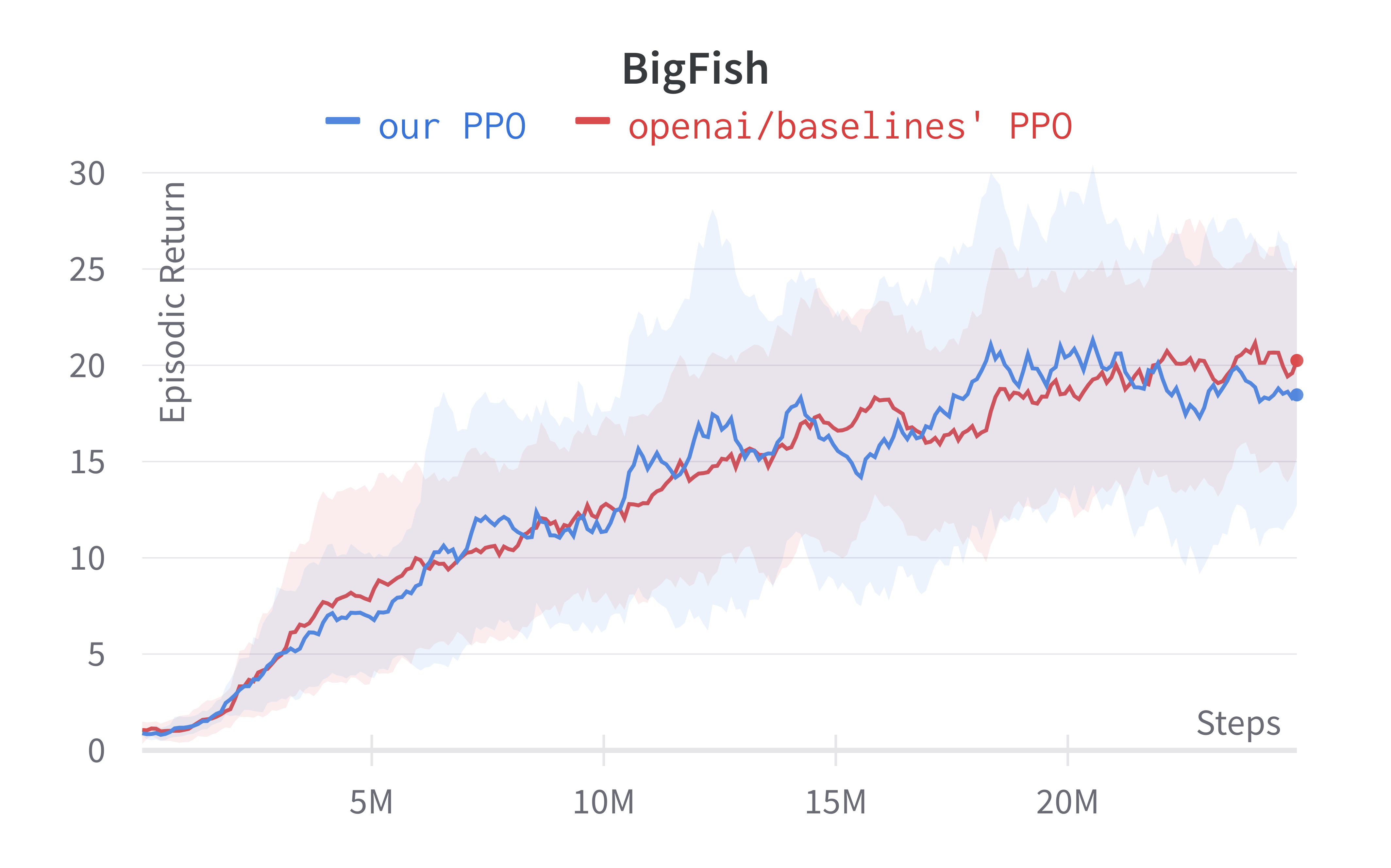